Posted on August 23, 2018 by bashakillbirder 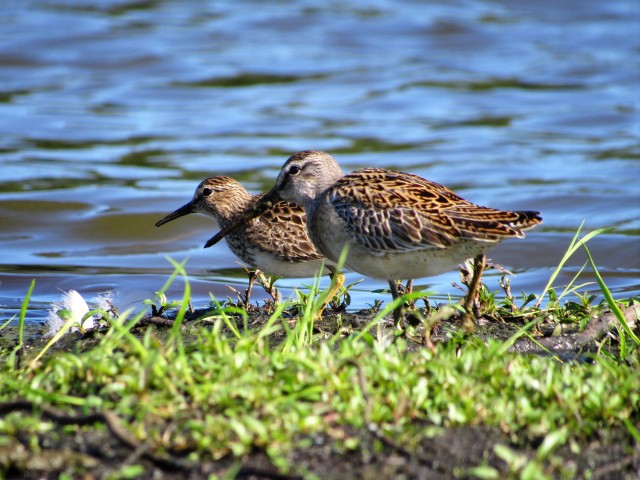 The Short-billed Dowitcher in the foreground and the Pectoral Sandpiper in the back.

After viewing last nights radar and realizing there was some significant movement I decided to head up county to start my rounds.  At the Apollo Plaza I had four species of shorebirds including my FOS juvenile GREATER YELLOWLEGS and SOLITARY SANDPIPER.  At Morningside, there had been some increase and turnover of shorebirds as well.  The ongoing SHORT-BILLED DOWITCHER  was present and in the company of an adult PECTORAL SANDPIPER and a juvenile SEMIPALMATED PLOVER!  These birds spent most of the morning together.   Other shorebirds included about a dozen Least Sandpipers (all but one juveniles) three Spotted Sandpipers and two Solitary Sandpipers. That’s a total of eight species of shorebirds between the two locations.  From there I headed to the Bashakill.  Patrick Dechon and Karen Miller had informed me that there was considerable activity there with the first real influx of passerines.  I only covered the Deli Fields and Haven Road, but had some nice birds.  The best for me were a duo of BLACK-BILLED CUCKOOS at the Deli Fields.  I initially thought there was only one, which I was photographing until a second called and the first flew right over to it.  I had a number of vireos and sparrows as well as Goldfinches and Bluebirds. Pewees abound and I think I had a brief look at an Olive-sided Flycatcher that got away on me. I had a couple of Great Egrets among the Great Blues on Haven Road.  Another great morning!

Semipalmated Plover and Black-billed Cuckoo in the above shots.

2 Responses to Some migration!