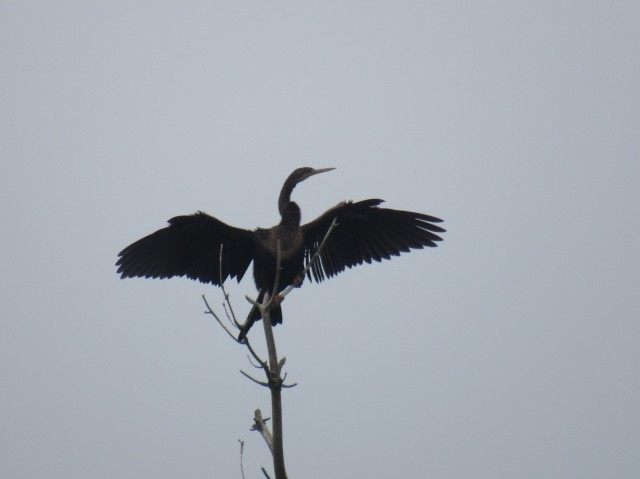 This morning I visited Apollo Plaza and Morningside Park during the heavy rainstorms.  I had half a dozen Semipalmated Sandpipers and Killdeer at Apollo, but the rain was so heavy I couldn’t make out what the shorebirds at Morningside were.  I decided to go home, have an early lunch and return when the rain stopped. I quickly saw when I got home that the rain was ending, but it would be for a brief couple hours at best. I loaded my kayak and headed right back to Morningside.  I paddled around the lake finding nice birds.  Semipalmated Sandpipers, Least Sandpipers, Spotted Sandpipers, Great Egret, Great Blue Heron and Green Heron.  As I rounded an Island, I noticed what I thought was a Double-crested Cormorant huddled in a tree. I took a couple of shots of the bird and then looked at them in my Camera and was stunned.  It was an ANHINGA!!!  I took a couple dozen more shots and posted the bird to “Whats App” to let our local birding community know.   I took more shots and eventually worked my way to shore to wait for birders to arrive. Eventually, Scott Baldinger, Clay Spencer, Karen Miller, Ken McDermott, Kathy Ashman,  Bruce Nott, Joyce Michelson and Rich Guthrie arrived and had good looks at the bird before it took flight once again and flew very high, disappearing. I would like to note that we have been experiencing an intense front coming directly from the south for the last 48 hours. It has brought high winds, thunderstorms and heavy rain.  I’m sure this bird somehow managed to hop on that front and end up here.

Addendum: This bird is only the fourth record of this “Mega Rarity” for New York State, a first for Sullivan County and the first ever documented with photos!

The Anhinga Perched high in a tree.  Below, when it first landed.

In flight over the lake. 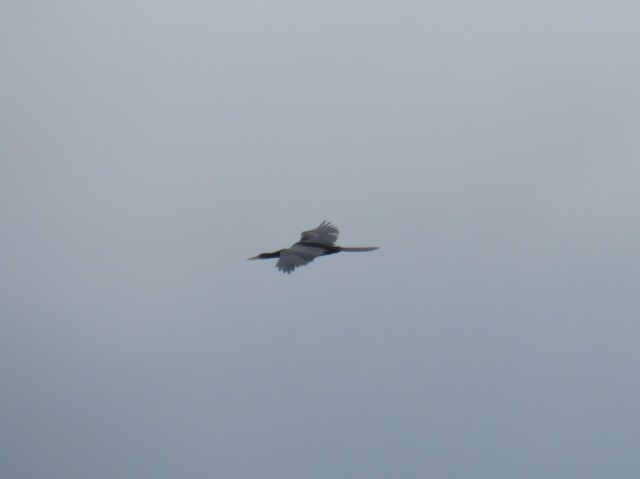