This morning I headed to the Sullivan County Transfer Station to drop off my recyclables. As I was leaving, a cuckoo flew directly in front of my car on the road out.  I couldn’t see any yellow in the bill, but it was a cloudy morning and I couldn’t be sure.  The bird landed in a stand of Poplar near the end of the road, so I pulled over and walked up to the trees.  I could just see the bird sitting in the shadows.  As I started to walk around the trees, the bird began to call.  Coo Coo Coo, Coo Coo Coo!  Yes, finally a BLACK-BILLED CUCKOO!  I managed to get around to where I could see better and had a great but brief look before the bird dove for cover.  I eventually made my way to the Bashakill, where things continue to be interesting.  I heard the usual Gallinules, and heard one LEAST BITTERN near the Main Boat Launch.  It sounded farther out into the marsh than it had yesterday.  Eventually, I ended up at the Deli Fields.  It seems there’s something new everyday there!  I had the usual Field and Song Sparrows, Eastern Kingbirds and Red-winged Blackbirds. As I was watching a Field Sparrow, the female ORCHARD ORIOLE flew past me, landed in a Locust Tree, fed on some blossoms and quickly vanished.  I never saw her leave and don’t know where she went.  This is the first time I have seen her since Saturday.  Almost immediately, the immature male flew in.  As I started taking pictures of him, I heard a familiar buzz call directly behind me.  EASTERN MEADOWLARK!   I haven’t had one here in a couple of years, and they are usually an early spring passing migrant.  This is breeding time!  At first it continued to buzz in the grass unseen.  Then it suddenly burst out in song and did a display flight across the field!  I don’t know if this is an indication that there is another bird present or not, but it is promising.  The Deli Fields, as a restored grassland by the DEC are starting to come into their own.  Lets hope it continues! 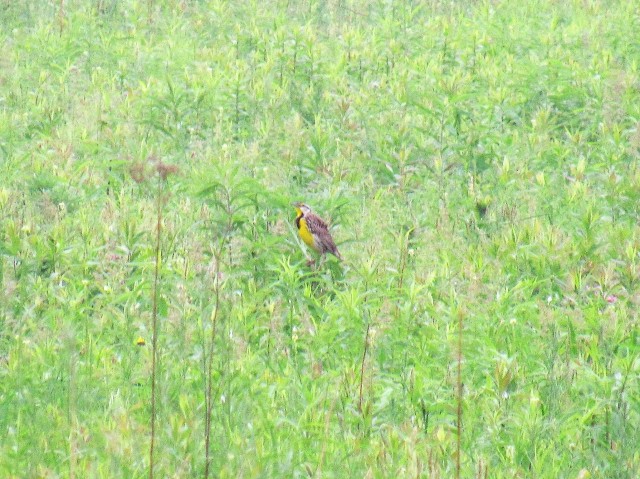 My first Meadowlark at the Deli Fields in quite some time! Lets hope he finds/has a mate!

2 Responses to An interesting morning