A Great Day in the Adirondacks!

The trail into Bloomingdale Bog

This morning I was up and out early in hopes of an exciting day of birding. That’s just what happened! It was a beautiful day, sunny and cool. NO BUGS! Birds were very active, singing, flying about and many feeding young. My target birds took their time to show up, but once things started jumping, they really did. I was searching the dead trees on west side of the trail. I had had Black-backed Woodpeckers in this spot three years ago and was hoping to repeat the experience. I failed to spot any and had just begun moving down the trail when I heard the familiar tapping of a BBWP. I rushed back, but couldn’t spot anything at first. Again tapping. Just when I thought I wouldn’t see the bird, two Cedar Waxwings dive bombed one of the trees and a beautiful BLACK-BACKED WOODPECKER came around from the back. I took it all in, but it was short lived. The waxwings which had done me a favor continued the attack and drove the woodpecker off, deep into the woods. Just then a local birder “Ed” came along. I told him about the woodpecker and he said he had heard it from up the trail. Ed was very knowledgeable about the bog. He gave me lots of great info. I told him of my lack of Gray Jays over the two days and he was very surprised. He suggested that I just wait them out. He said there are two family groups and eventually they would be impossible to miss. He then went on down the trail. Moments after he left, I heard another BBWP up the trail in the opposite direction than the first one had flown. I rushed up there, hearing tapping again. The bird took off, much closer than the first and flew closer to the trail. I headed right up to the area and began to search in hopes of a photo. As I looked, a GRAY JAY flew in and perched near me. I got out my sunflower seed, raisin and peanut mix and it flew right onto my hand, feeding gladly. Ed came back and we enjoyed a family of three, a pair and one juvenile for quite some time. I suddenly realized I had forgotten about the woodpecker. I heard it one more time, but now quite distant. I continued to bird the bog after Ed left, but had many of the same birds, nothing new. Finally at 11:00 am I decided to head to Bigelow Road and Oregon Plains Road. I spent an hour and a half here, but things had quieted down quite a bit at midday. I decided to go for lunch and start the long ride home, very happy with the mornings results. 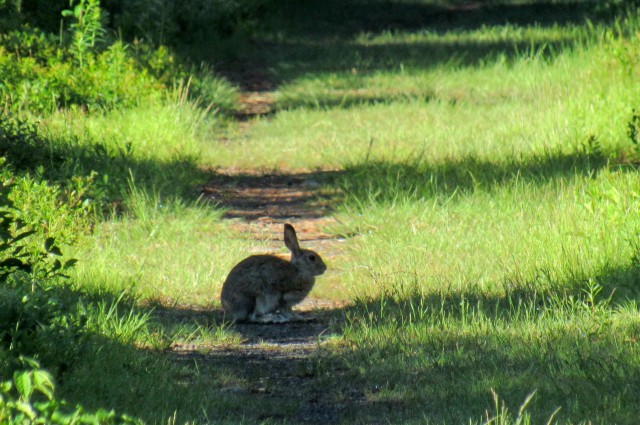 The “Crazy” Snow Shoe Rabbit. Both days of my visit, this rabbit would suddenly appear behind me. I would turn around, surprised by its presence, try to take a photo and it would do flips in the air, running off to distant locations and disappear. Ten minutes later I would turn around and the whole episode would repeat itself. I can’t tell you how many times that happened. Finally, late this morning I snuck up on the crazy rabbit and got one shot of him. That must have done the trick, I never saw him again.

All of the jays ate out of my hand, so I couldn’t resist sticking in one of the shots of the juvenile in hand. The whole “Gray Jay Experience” alone is worth a trip to the bog!

2 Responses to A Great Day in the Adirondacks!